Wherever you are in Australia, there are financial assistance options available to help your business survive the economic downturn and uncertainty of the coronavirus pandemic.

On 12 March 2020, the Australian Government released its economic response to the coronavirus (COVID-19) totalling $17.6 billion across the forward estimates and the ATO also released a series of administrative concessions for taxpayers, to protect the economy by maintaining confidence, supporting investment and keeping people in jobs.

See our latest blog on the payroll relief measures on offer in your state or territory. 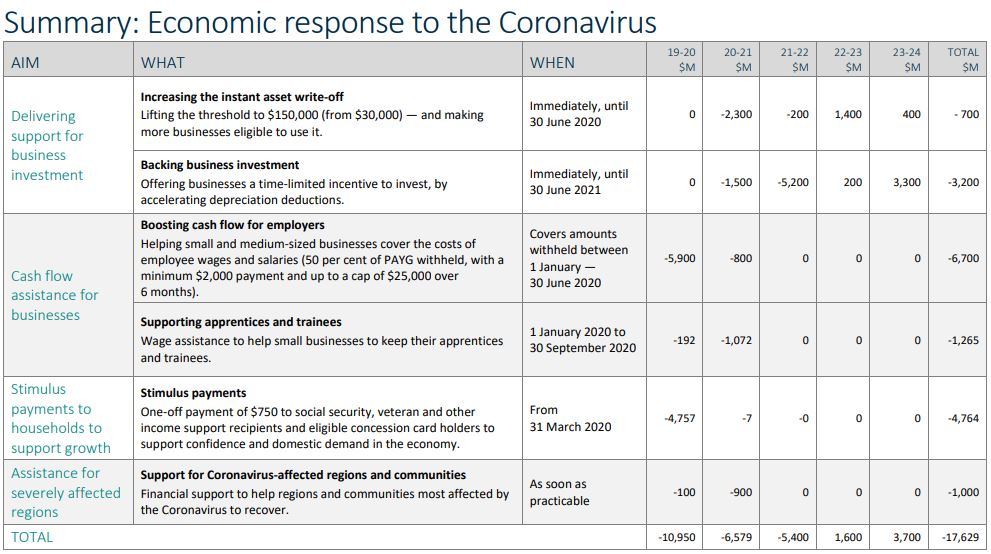 The Legislation giving effect to these measures still needs to be introduced into the federal parliament and then passed. When Parliament resumes on 23 March 2020, the pressure will be on the legislators to pass these measures urgently, so businesses should be ready to act as soon as possible.

Tax incentives for business investment
Instant asset write-off increased: For new or second-hand assets first used or installed ready for use from 12 March until 30 June 2020, the instant asset write-off threshold will be increased from $30,000 to $150,000 for businesses with aggregated annual turnover of less than $500 million (up from the current $50 million threshold).

Backing business investment incentive: Businesses with aggregated annual turnover of less than $500 million per annum will be able to deduct 50 percent of the cost of an eligible asset upon installation, provided it was acquired after 12 March 2020 and first used or installed by 30 June 2021.

Cash flow assistance for businesses
Boosting cash flow for employers: Up to a $25,000 tax-free payment to small and medium-sized businesses with aggregated annual turnover of less than $50 million that employ workers, between 1 January 2020 and 30 June 2020.

Supporting apprentices and trainees: Eligible small business employers will be able to apply for a wage subsidy of 50 percent of the apprentice’s or trainee’s (in training as at 1 March 2020) wage for up to 9 months from 1 January to 30 September 2020, up to $21,000 per apprentice.

Tailored tax reprieve
The Australian Taxation Office’s (ATO) administrative concessions to assist businesses impacted by COVID-19 is not automatic – taxpayers must contact the ATO to request assistance, and if eligible, the ATO will ‘tailor the assistance package for the relevant taxpayer’, which can include:

State-by-state stimulus
In the week following the federal government announcement, several states and the Northern Territory announced their own stimulus packages; as the Australian and world economies enter unchartered waters, further measures may be declared at any time.

Victoria had not announced any further stimulus or business support measures at the time of this blog’s publication.

New South Wales
On 17 March 2020, the NSW Government announced a stimulus package with two key components — $700 million in extra health funding and $1.6 billion in tax cuts to support jobs. Key elements of the package include:

On 13 April 2020 a $440 million lad tax relief package was announced by the state government for commercial land lords who pass the savings on to tenants through a rent reduction.

Queensland
Also on 17 March 2020, the QLD Government announced a $500m loan facility that will be created to support businesses, which will comprise loans of up to $250,000 with an initial 12-month interest free period for businesses to retain staff.

An initial 6-month payroll tax deferral will also be extended to all businesses across the State. This payroll tax relief means that businesses will not need to lodge or pay payroll tax returns until 3 August 2020. The Office of State Revenue will also work with affected businesses to create repayment plans for the deferred tax liabilities.

A $27.25 million package was also announced to provide immediate assistance to help Queensland business in hospitality and food export manage the impacts of COVID-19.

Western Australia
On 16 March 2020, the WA Government announced a $607 million stimulus package to support WA households and small businesses in the wake of COVID-19, with measures including:

South Australia
On 11 March 2020, the South Australia Government announced a $350 million stimulus package that will include current infrastructure projects being brought forward, as well as new projects around road maintenance, housing, tourism and health. More detail of the package are still to be released.

On 5 April 2020, the SA government announced that businesses whose employees qualify for the Federal Government’s historic $1500-a-fortnight JobKeeper support payments will be exempt from paying any payroll tax on the wage subsidy.

Tasmania
On 17 March 2020, the Tasmania Government announced a $420 million package comprising stimulus measures targeted at the hospitality tourism, seafood and exports sectors, including:

Other businesses with payrolls of up to $5 million will still be able to apply, based on the impact of virus, to have their payroll tax waived for April to June 2020.

Northern Territory
On the 18 March 2020, the Northern Territory (NT) Government announced a $60 million coronavirus stimulus package to encourage spending on home renovations and business upgrades in an effort to prevent widespread job losses across the NT. Under the new ‘Home Improvement Scheme:

Business owners will be able to spend their grant on upgrades or equipment if purchased from an eligible Territory business.

On 8 April 2020, the NT government announced $180 million in additional support to Territory businesses as part of its Jobs Rescue and Recovery Plan.

Australian Capital Territory
On 20 March 2020 the ACT government announced a wide-ranging $137 million stimulus package that complements the Federal Government’s package, with a focus on sectors most affected by coronavirus. The business support measures to include:

Victoria
On 22 March 2020, the Victorian government announced a $1.7 billion economic survival and jobs package, which has been developed following discussions at National Cabinet and complements the work of the Federal Government. Support measures for business includes:

Superannuation guarantee amnesty
Don’t forget to look into the superannuation guarantee amnesty the government introduced on 6 March 2020. The amnesty allows employers to disclose and pay previously unpaid super guarantee charge (SGC), including nominal interest, that they owe their employees, for quarter(s) starting from 1 July 1992 to 31 March 2018, without incurring the administration component ($20 per employee per quarter) or Part 7 penalty. 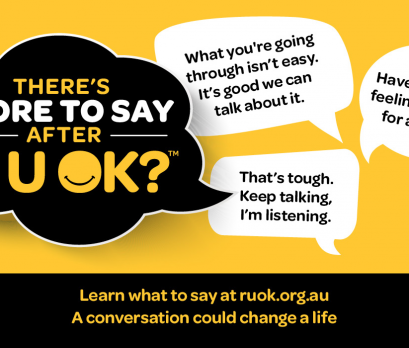 There’s More To Say After R U OK? Day How to advance eLearning in your workplace